Over 500 scholarships given to NTUA graduates, the Coast Guard and other bodies for technical education 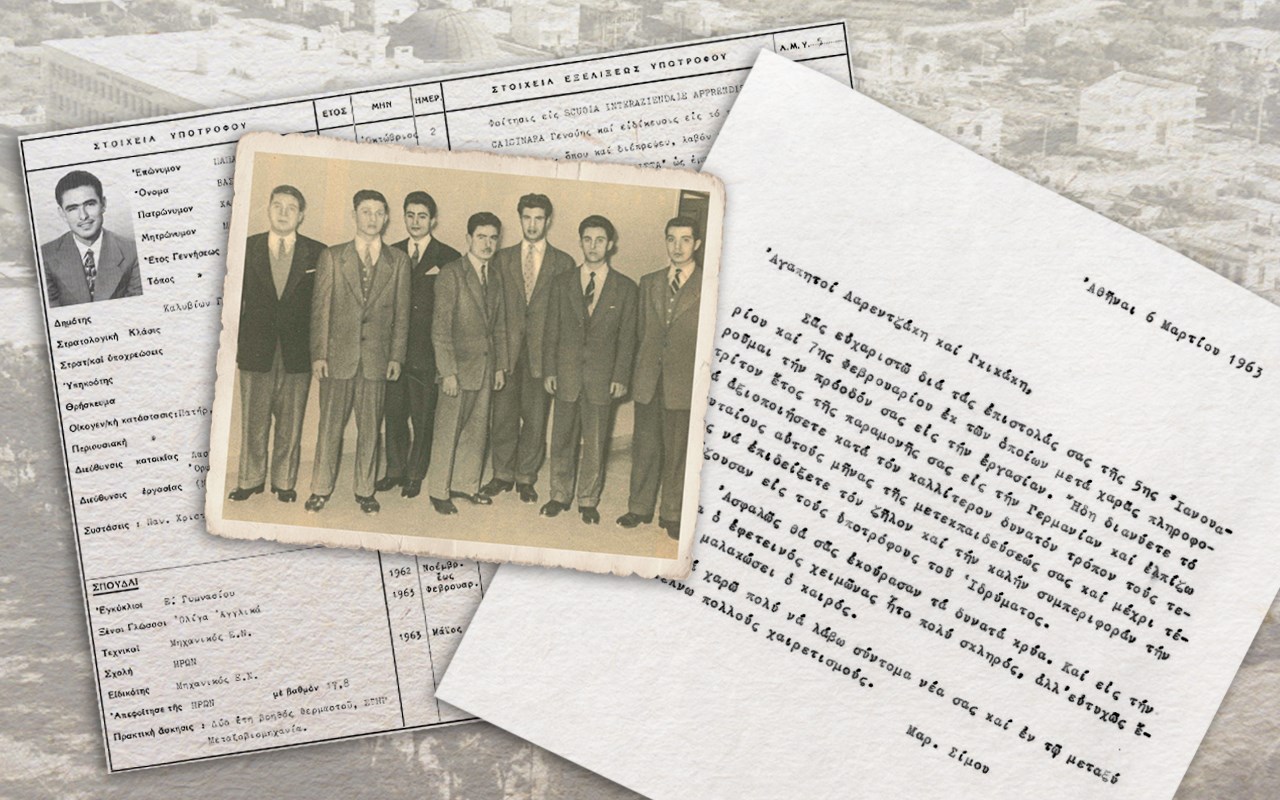 In collaboration with consultants and with the help of Nikolaos Vernikos-Eugenides, Marianthi Simou decided that one of the first areas for the Foundation to become active in for the fulfilment of its goals was the provision of scholarships to Greek youth. This decision was arrived at through detailed study of the state of technical education in Greece, the recognition of its weaknesses and the recording of its needs. The technical education system was then crumbling, mainly due to the lack of specialized teaching staff for technical courses and the nearly absolute lack of appropriate textbooks for the students.

The provision of scholarships to young Greek people so that they may study at technical universities in Greece or abroad aims chiefly towards the most complete technical training of the recipients, but also towards the creation of teaching staff for the existing technical universities in Greece. The Foundation’s administration was the only competent authority to decide regularly upon the number of scholarship recipients, the academic disciplines for the scholarships, duration, monthly expenses and the general terms and conditions for granting scholarships. The recipients were chosen in two ways: either through a competition or without, where the Committee determined objective criteria for the examination of the candidates. The scholarships are granted for studies abroad or within Greece.

The first scholarships for studies abroad were announced by the Foundation directly after the publication of the article ‘Περί Συστάσεως του Ιδρύματος Ευγενίδου και κυρώσεως του Οργανισμού διοικήσεως και διαχειρίσεώς του’ [About the establishment of a charitable institution in Athens under the name Eugenides Foundation and the ratification of the by-laws of its administration and management] by royal decree in the Government Gazette in February 1956. That this announcement was made so quickly was made possible by the considerable preparation done by Marianthi Simou, along with her consultants.

Beyond the decision to grant scholarships, the Foundation’s administration was obliged to provide solutions to a series of existing problems having to do with the condition of technical education. Firstly, the then operating technical universities in Greece, most of which were private, had to be evaluated, so that those that met the requirements for providing a satisfactory level of education could be chosen. From within those universities, potential scholarship recipients were scouted. Additionally, universities abroad that would accept the scholars had to be found: this was not an easy task, as the provision of technical education in Europe and the United States was radically different to Greece.

The scholars were sent, through the Foundation, to universities abroad according to the specialization they would pursue. There were two main specialisations: mechanical engineering and electrical engineering.

Before the scholars’ departure from Greece, the Foundation arranged their university registration, their stay in suitable accommodation and guidance from a university supervisor. In the case where knowledge of the language of the country to which they would be moving was not sufficient for the course, the scholars were required to take language classes for two months in immersion schools, where the teaching focussed on learning the relevant technical terminology.

The scholars submitted annual essays to the Foundation, in which they would describe the progress of their education, the teaching curricula, the challenges they faced, their progress and their criticism of the teaching method in laboratory courses. These essays are invaluable testimonials for us to understand the philosophy behind the teaching of technical courses in the technologically advanced countries of Europe and to explain the contribution of these universities’ graduate students to their countries’ industrial development; they also verify Eugene Eugenides’ vision about the need to develop technical education in Greece in order to reach a European standard.

The relationship between the scholars and the Foundation for the duration of their studies was not formal, but familiar. The scholars corresponded with Marianthi Simou, and the contents of their letters mention, other than their studies, everyday human issues and joys. Simou would reply to all of these letters with fondness.

Out of the 29 scholars the Foundation sent abroad up to 1966, 27 of them completed their studies and returned to Greece. All of them were employed in industries, companies, public services, organizations and schools. The scholars’ positive contributions to their area of employment justified the Foundation’s decision to select them to receive scholarships. The scholars were able to choose their place of employment freely, without any restrictions from the conditions of the scholarship. This confirmed the existence of the unrestricted, unconditional love Eugene Eugenides and Marianthi Simou had for their country.

Between the years 1967-1986 the need to grant scholarships lessened as a result of the significant improvement in technical and professional training in Greece: the professors in technical and vocational universities received specialized training. The Foundation had already written and published 175 textbooks for the vocational and technical lyceums between the years 1978-1985, while from 1957 to 1978 it had covered all publication needs for primary and middle technical schools and the new-type technical schools with a total of 130 books.

In 1987, which marked the 150th anniversary of NTUA, Nikolaos Vernikos-Eugenides, Marianthi Simou’s successor, offered, by the decision of the Management Committee, scholarships for the following decade to graduates who excelled or to worthy Greek NTUA graduates who did not have sufficient financial means to study. The scholarship recipients, after being proposed by NTUA departments, were selected by a committee. These scholarships continue to be granted today and have exceeded 400.

Since 1989 the Foundation’s Management Committee, on the initiative of Nikolaos Vernikos-Eugenides, has also offered scholarships to members of the Hellenic Coast Guard for postgraduate studies abroad. These scholarships, which continue to be granted today and already exceed 70, have contributed, and continue to do so, to the creation of highly trained members of the Hellenic Coast Guard, capable of successfully facing the challenges of international shipping and worthily representing Greece.

To conclude, from 1992 to 2016 scholarships were granted for universities in Greece and universities abroad for postgraduate and doctoral studies.